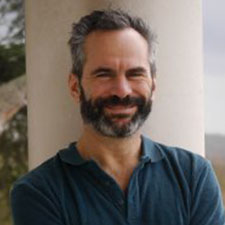 An interview by Silvia Baba Neal

Mick Cooper delivered a riveting keynote speech during the EATA/IARTA Research and Theory conference and I was particularly intrigued by his ideas about directionality. Mick was trained in existential psychotherapy and Person Centred counselling,

yet he makes a genuine effort to learn about other therapeutic approaches and he sincerely believes that there is a great deal of cross-modality theoretical richness that we can all tap into. As a speaker, Mick is very much on demand – he joked about the fact that he had managed to double-book himself on the day. Although he had a train to catch, he fulfilled his promise to give me a brief interview.

Silvia: How long did it take you to prepare this keynote address? It was amazing.

Mick: Thank you. I’ve been working on these ideas around directionality and synergies for about fifteen years.

Silvia: I’m not sure I’ve seen the theory articulated before. The book I am most familiar with is “Essential research findings in counselling and psychotherapy”. What surprises me and delights me really is that you are so familiar – more than familiar with TA. During your speech you were very modest about it but actually I felt that you have a very in-depth grasp on it.

Mick: I did spend some time before the talk just trying to re-familiarizing myself. I know the basic texts, I know the basic context, but what I’m not so familiar with is the modern developments; I have read the work by Charlotte Sills on Relational TA and Richard Erskine’s work, so I am doing my best to understanding the contemporary map of TA. It was actually really nice to find out all the things that are happening in the field – there are some really exciting developments, which is great to know about.

Silvia: And I think the reason why these developments are exciting for me is that the contemporary attitude is also a pluralistic one – although they wouldn’t call it as such – but it’s very integrative

Silvia: I think in Relational TA especially there is a lot of cross- fertilization with contemporary psycho-analytic theory such as the relational approach.

Mick: One of the things that was interesting in preparing for this talk and I am going to a Cognitive Analytic Therapy (CAT) conference to talk about something similar – so I was reading quite a bit of their CAT literature as well – and really what struck me was that beneath the language differences there is so much similarity! People are saying things that are really similar, which is that: clients, with the best will in the world, have learned to do things which are not particularly useful for them, and what we do as therapists is we help people find better ways of doing things and we’re all doing that really and we’ve all got some great ideas. In CAT they have this idea about reformulation letter and I think “Why am I not doing that as an existential therapist?” I’m not doing it because Rollo May did not come up with the idea, and if he had I probably would have been doing it, or if Emmy van Deurzen had said it was a good idea … and there is something there, some sort of contrariness about what we do in our field.

Silvia: It’s to do with the tradition that we’re embedded in, isn’t it?

Mick:  It’s to do with traditions.

Silvia: I sometimes think that the tensions between the different schools of therapy are more to do with branding and political interests and money.

Mick: Totally. And that’s really why I think why the pluralistic work we did was absolutely about that – about saying we’ve got to understand this is not really in the interest of our clients. Our work is so much on self-awareness, on recognising our own agendas and what we’re about. I really think it’s time as therapists that we thought: “What is my allegiance to my school really about? Where is that really coming from?”

Silvia: Have you done some research around that question?

Mick: I haven’t yet but we’d be really interested in doing research about it. An exercise I do in my workshop on pluralistic therapy, is ask people to think about which schools of therapy they like or don’t like and ask them to think about how they would feel if they saw some research saying that the therapy that they don’t like was really effective, or the one that they do like was really ineffective. It’s interesting because it does bring out an emotional reaction. I mean I know for myself I’ve always had a thing – I have not really liked Cognitive Behavioural Therapy (CBT) – although I didn’t know much about it.

Silvia: Just not liking it on principle.

Mick: Not liking it on principle. [We both laugh] If I see some studies saying CBT wipes the floor with Person Centred therapy I have an emotional reaction.

Silvia: So you might try to dismantle it. I am thinking here about the confirmation bias – which is about selecting information that only fits with our beliefs.

Mick: You’ve always got to give the clients what they want and always have to have lots of dialogue about that. Sometimes they don’t want to talk about what they want; sometimes they just want to get on with it. It’s not assuming that a pluralistic approach is going to be better than some of the other orientations. There is no evidence for that. People who do TA/Person Centred/Existential can be really effective, but I think there is something about saying you can practice in those ways and still value and respect other approaches to therapy.

Silvia: If I remember correctly, when I last saw you speak [at Metanoia’s Research Academy] you were talking about research that has been done around the question which therapists are most effective – can you tell me a little bit more about that?

Mick: Yes, so there’s some emerging evidence from researchers like Michael Barkham and his team at Sheffield University - which is really valuable research – beginning to look at what we know about therapist effectiveness. We know that some therapists are more effective than others and there’s some good evidence for that. What we don’t know is really why. I think one of the studies that came out showed that therapists who were more mindful did better; therapists who were more empathic as people seemed to make much more difference.

Silvia: Anything to do with flexibility in how we work and adaptability to the clients?

Silvia: They are probably less likely to get bored as well.

Mick: Yes, I think so. And I know that in my own work as I become more integrative I find it more rewarding, but I think in terms of actual outcomes certainly there is.

Silvia: How has your experience of being so involved in research transformed the way you work?

Mick: That is a great question. And I think that has been a great influence on John McLeod and myself and why we moved towards a more pluralistic stance, because I think that when you are involved in research and when you do research you just can’t hold onto a ‘schoolist’ perspective because there’s no study showing that Person Centred therapy is more effective than psychoanalytic or CBT. What research shows again and again is that different therapies are as effective as each other most of the time. What you also see in research is that clients want different things and that their preferences seems to matter. It shows you that the relationship is important, but it also shows that techniques can be important. So I think that research challenges you to be much more open. When you come to conferences like the Society for Psychotherapy Research (SPR) you don’t see much ‘schoolist’ thinking, and people there tend to be very open minded because they are so immersed in the research – it forces you in a way to be more open.

Silvia: I don’t know if you ever had a purist stance to begin with, but was it hard to let go of your assumptions?

Silvia: And why shouldn’t you in a way. You have to have a core, an identity.

Mick: A core, an identity, a community and people that I love and trust, who are part of that community, people I feel safe with. I’m thinking about my existential therapy community and my teachers like Ernesto Spinelli and my colleagues like Emmy van Deurzen. They are people that are enormously important to me.

Silvia: Does your existential therapy community appreciate the sort of work that you have been doing or do you sometimes get criticism as well?

Mick: [laughing]. Yeah, I mean Ernesto, whom I would see as my most important mentor – he’s a bit ‘non-plussed’ about it really. I don’t mind.

Silvia: I imagine he would be, having read his books.

Silvia: He tries to de-mystify therapy.

Mick: Yeah and I think a lot of my work in pluralism comes from that and it comes from his work around ‘not knowing’, but when I talk to him about it he’s like “Meh, pluralism-shrularism” [Laughs] He’s kind about it though. He does his own stuff and we can talk about most things.

Silvia: I wish I trained in existentialism, but I am educating myself by reading some of his books and I think it is a very rich approach.

Mick: It is a rich approach.

Silvia: I am so envious as you all seem so fluent in philosophy.

Mick: Well that is a nice thing that you learn about that, but I think practically existential therapy can actually be a limited approach in some ways, I mean I am envious of people who do things like TA and CBT and learn more practical skills. Because I think that (in) a lot of my training you could talk about Heidegger and, yes, that was an amazing experience, but nobody at the time taught us how to do that with a client.

Silvia: You had to figure that out for yourself. It takes longer but perhaps…

Mick: I’m not sure you figure much at all… I think if you did a research study testing that [laughs]-

Silvia: I think there is a lot of value in looking at what is actually occurring in the therapy room.

Mick: We’ve done research now around what actually happens in existential therapy and most of it is very person-centred.

Silvia: I bet that if you placed a recorder in each of our counselling rooms, you’d find that we make very similar interventions.